Theodore James Benjamin Wearne (Theo) was a successful businessman with a quiet, caring, and generous nature. He made numerous donations to various funds in both (world) wars and was a liberal donor to churches in both Singapore and Western Australia.

Theo, the youngest of nine siblings, was born in Mandurah, Western Australia, on 5 May 1878. His family had moved from the Victorian Goldfields to Western Australia and Theo and his brother Charlie grew up in a house on High Street, Fremantle, near Monument Hill.

Theo followed his brother Charlie to Singapore, departing on 15 December 1892 at the age of 14, to join the New Harbour Dock Co. It was here that he completed his Ship’s Engineer’s apprenticeship in 1897. He then worked on vessels sailing out of Singapore to Fremantle and South East Asia. In 1900 Theo passed for second engineer then Chief Engineer in early 1903 at Aberdeen, England. Later the same year, in Liverpool, Theo was awarded an Extra Chief Marine Engineer’s ticket (the first Western Australian to do so). He returned to Singapore and worked with consulting engineer D.D. Mackie Junior and civil engineer Walter Palliser.

Charlie was in WA, however soon returned to Singapore upon Theo’s suggestion, to set up a business selling motorcars, motorcycles, and trucks.

On 1 April 1906, the business of C.F.F. Wearne and Co commenced in the coach house at the rear Theo’s brother-in-law’s residence. Theo provided the initial capital ($700) for the venture. By 1 December 1906 the business had expanded and moved to premises on Orchard Road. Theo officially joined the Company and by mid-1907 C.F.F. Wearne & Co were agents for six different makes of cars.

Theo’s wife, Isabella Templeton Hodge (known as Ella) was born in Scotland on 14 December 1894. She travelled to Singapore with her mother, arriving in July 1895 at the age of 6 months old. Her father was waiting for them in Singapore as he had been the Captain of a ship sailing up to China. He then joined McAlister & Co. Ltd. and the family settled in Mt. Elizabeth, where Ella grew up.

Theo and Ella were married in Singapore on 14 November 1910. They had one child, a daughter called Ella Dorothy, who unfortunately died in 1914, at the age of three. For many years Theo and Ella hosted the annual Christmas party in the grounds of their home for the Sunday school children at the Presbyterian Church in Singapore. In later years when they were absent from Singapore, they always sent a cheque for the party. 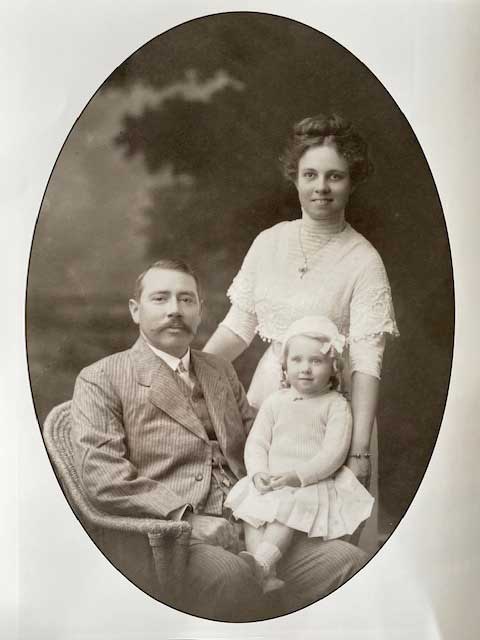 The business had many successful years of trading, following which a public issue of shares was made in 1913 and ‘Wearne Brothers Limited’ – Motor Engineers and Importers – was formed. Wearne Brothers Limited prospered and branches were set up in Malaya, Burma and other adjacent countries. In addition to selling and maintaining many popular makes of cars (particularly ‘Ford’), motorcycles and trucks, Wearne Brothers introduced a fleet of taxis to Singapore, and commenced Wearne Air Services in 1937 (the first in Malaya). The Japanese invasion during World War 2 caused the firm to suspend operations. Theo left Singapore on one of the last convoys (10 Feb 1942) to clear the port before Singapore fell to the Japanese.

On 17 February 1945, Wearne Brothers Limited was transferred to the English Companies Register. Theo was concerned for the wellbeing of his employees at this time and provided some financial assistance to alleviate the hardship experienced. Business resumed profitably in 1946 with Theo as Chairman of the Board through to his resignation in 1952, at the age of 74. Theo and Ella left Singapore in 1955 to live in Capetown, South Africa, then Jersey in the Channel Islands. Before leaving Singapore, they established The Ella Dorothy Wearne Trust for the purpose of promoting the object of the Sunday school.

In 1960, at the age of 82 and to celebrate his golden wedding anniversary in Perth, Theodore Wearne gifted A£100,000 to set up the Theodore and Isabella Wearne Charitable Trust Incorporated in his native state of Western Australia. The first Directors of The Trust were either family members, close friends, or former employees of Wearne Brothers Limited in Singapore.